I think that group classes are the most efficient way to learn things and to practice new physical skills. They are ideal for learning to remain calm (especially in contact with other people), move in public spaces with security, communicate clearly with others, and to improve many physical skills. It is easier to recreate real-life situations and train responses to them, and it allows more variety in practice, as well as being more financially accessible. In my opinion, group classes are the most practical way to learn most things, when time and space allow it.


What makes my self-defense courses different from others?


1. A gender perspective: There are differences between men and women and teenagers of both sexes, in terms of both general physical characteristics and the types of violence that they most frequently experience. A gender perspective allows us to see where danger really is for different groups and what we can do to avoid or combat it.

2. Mind-body work: I teach people techniques to keep calm and to handle their emotions, tension, and the experience of adrenalin working in their body, because I think this training is critical to actually being able to apply self-defense techniques in a real situation. I use role playing and simulations to train and practice everything that I teach, including communication skills and physical techniques.

3. I work with verbal and non-verbal communication, and awareness of position and personal space: These kinds of tools allow us to handle dangerous situations in such a way that we avoid physical violence whenever possible.


I can teach in English, Spanish, or Catalan.

This is a basic course to learn to handle situations of conflict both physically and emotionally. We seek to avoid physical violence when possible. If physical violence is inevitable, however, we need to know the legal framework for protecting ourselves and responding to violence. The skills I teach here are aimed at teaching people how to:.


- Keep as calm as possible

- Be aware and perceive correctly what is happening around them

- Listen to their intuition

- Set and uphold limits (with their voices and body language)

- Organize their physical space, position themselves

- Free themselves from basic holdspreses

- Hit, kick, and push simply and effectively in the safest possible way

- Counterattack, responding to a physical attack from a single attacker 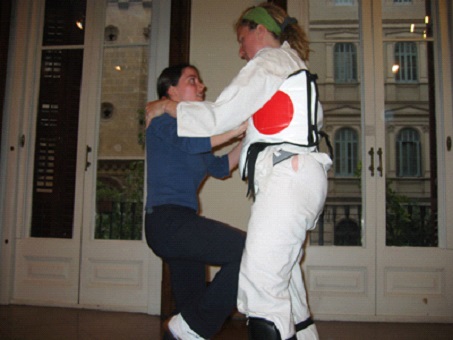 
I require students to have done a Level I class with me. At this level we work to perfect techniques that I have already taught and I teach some new techniques to deal with some more complex types of situations.


The course consists of:


- Reviewing and perfecting the techniques learned in Level I

- Work with breathing and learning to use the voice better, particularly shouting

- Learning to fall forwards and backwards, and to fight better on the ground

- Work on awareness of space and position, how to strategize for survival when faced with more than one attacker

- Specific techniques for situations with more than one attacker

- Training to deal with the added adrenalin of more than one attacker, returning to a calmer state

In this course, besides practicing with classmates, we have some simulation sessions training with one and two padded attackers. 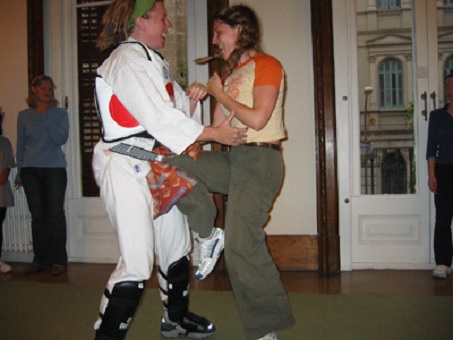 
The philosophy is the same as in the other courses, but the focus is specifically on homophobic violence and the different forms it tends to take. This means that we also work with the awareness of space and positioning, and verbal and non-verbal communication. But the course offers a theoretical framework and practice specifically aimed at homophobic violence.


Based on the specific composition of the class, we practice the most suitable forms of physical self-defense, with awareness of the physiological similarities and differences between men and women.


Homophobic violence generally tends to differ from other types of attacks. It frequently involves verbal abuse, which may escalate into physical violence, although it doesn’t always. It is also much more frequent to encounter more than one attacker in homophobic violence, whether it occurs against women, men, or transsexuals. The course also deals with how to help other adults who might be with you at the time of the attack.


Topics included in the course are:


- The importance of keeping calm and how to do it

- Visual communication, the distance between people, the moment of entering into physical contact, and awareness of position in general.

- Communication with the voice, setting and maintaining limits, talking and shouting

- Where to hit and kick

- Using the parts of the body that are free, getting out of holds presas

- Series of movements and physical fighting

This is a course to enter into contact with self-defense. We only look at the most basic, fundamental techniques for defending oneself physically and psychologically from the most typical forms of violence against women. The emphasis is on the importance of physical position, non-verbal communication, and the voice to protect oneself in relation to others. Physically, we only work with physical situations standing up, with one attacker.


We work with basic concepts of gender and violence against women:


- The importance of keeping calm and how to do it

- Visual communication, the distance between people, the moment of entering into physical contact, awareness of position and surroundings

- Strikes: how and where to hit, kick, or push

- Getting out of some basic holds

- Physical fighting: facing combat, using the parts of the body that are not held, counterattack


Today many young people feel the need to know how to defend themselves and to feel more secure. It is important to give them these tools in a context that promotes equality, communication, and non-violence, promoting safety and confidence without causing unnecessary anxiety. This course deals with different types of violence that teenagers can face, the similarities and differences between boys and girls with respect to self-defense and the situations they may face, non-verbal and verbal communication, and physical training.

- The basic concepts of gender violence

- Visual communication, the distance between people, entering into physical contact, and awareness of position and surroundings

- How to handle conflict with other people while avoiding physical violence, and how to avoid the escalating of a situation

- The social and legal framework of self-defense, how to handle and report an attack, bullying, and other types of violence using social resources

- Strikes: how and where to hit, kick, and push

- Getting out of some basic holds

- Physical fighting: facing combat, using the parts of the body that are not held, counterattack

This is a theoretical and practical course, with individual, pair, and group exercises. We do role-playing and controlled simulations. In courses of 16 hours or more, we make a recording in class to work with the techniques learned and self-image, and then the recording is destroyed (no copies of the video are kept).


I think that the most important values that martial arts offer us today are empowerment and harmony. In my opinion, they are a means of personal growth that provide us with physical and emotional strength, the ability to make decisions when faced with danger and/or difficulty, persistence, and the ability to relate harmoniously to our own bodies, other people, and the natural world around us. In order to allow more ongoing, deeper work, I have created a stable group where I teach techniques from aikido, tai chi, and self-defense in an atmosphere of companionship and non-competition. 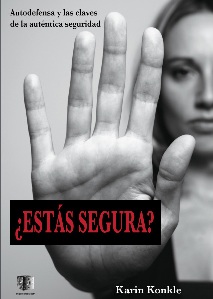 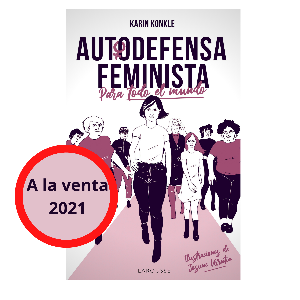